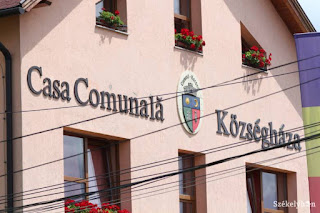 In its final ruling of April 8, the Marosvásárhely/Târgu Mureș Court of Appeals fined the mayor of the Transylvanian Korond village Mihály Katona to RON 463,884 (EUR 97,471) for failing to remove the Hungarian “village hall” inscription from the building of the local municipality.
The case goes back to February 2016, when the Asociația Civică pentru Demnitate în Europa (Civic Association for Dignity in Europe or ADEC), led by Romanian blogger Dan Tanasă, a well-known figure in the country for his legal actions against the ethnic Hungarian minority, sued the village for illegally displaying the Hungarian inscription. The Hargita/Harghita county court ruled in September 2016 that the inscription must be removed. The village originally complied, but replaced it in October 2016.

In December 2018 Tanasă’s ADEC turned to Hargita court again, asking again for the inscription to be removed. The Hargita court again ordered the removal, but both sides appealed the ruling: the village because it found the decision going against constitutional minority rights and ADEC for the court’s failure to impose a fine.

The Marosvásárhely Court of Appeals in its final ruling said that the mayor must pay a fine of RON 416 for every day the village was in violation of the original court order and RON 100 for every day he was in delay of complying with the court order, amounting to RON 463,884 or about 12 years and eight months’ worth of average net salary in Romania.
Korond is a village in Hargita county, internationally famed for its artisanal glazed pottery. According to the latest, 2011 census it has a population of 5,228, of which 4,869 are ethnic Hungarians.