This is how the Romanian secret service works in Szeklerland 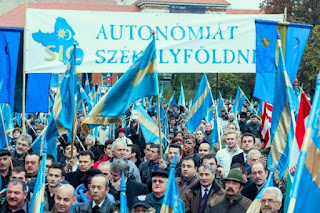 Secret service agents, state officials fulfilling orders, full-time challengers are trying to intimidate Hungarians and provoke them into things that the power in Bucharest can refer to when acting. Mno.hu presents some of them. Romanian journalist Dan Tanasa happily announced on February 6 that his professional Facebook page received 10 thousand likes. Four days earlier he wrote that his blog was visited by 372 thousand people last year. The Romanian internet analyzing service says that he is one of the most popular authors in Romania.

Ethnic cleansing
Who is this 34-year-old man who brought dozens of Hungarian local governments in Szeklerland to the court? According to people who know his family, he is the son of simple Romanian workers. He was born in Sepsiszentgyörgy, Szeklerland, he went to school there, he graduated at the Transilvania University of Brasov, the Faculty of Education and Psychology, and he earned a master’s degree of communication and PR in 2011. During the national-communist dictatorship a truly distorted picture was developed of Hungarians. They were told to be an alien and hostile population recently settled in the Romanian land with excessive and unjustified claims. They were told to be following hidden aims always moving against Romanians, mno.hu reported.

Dan Tanasa, by his own confession, has been writing since 2008 on the “massive abuses of local governments controlled by RMDSZ and the Hungarian Civic Party” that are committed against the Romanian residents of Hargita and Kovászna county. He also writes accusations to stop “ethnic cleansing” to which the Romanians are exposed. Sepsiszentgyörgy mayor, Árpád Antal, said that they have one or two people who always have to deal with the answering of Dan Tanasa’s questions. Fomer Social Democrat Senator, current mayor of Craiova, Lia Olguta Vasilescu said: “if Dan Tanasa did not exist, we would have to have invented him”. He reports in the name of the Civil Association for the Pride in Europe (ADEC), which is chaired by the blogger. The other three founders cannot be found on the social sites. The association has objectives, like the promotion of the Romanian nation-state, the protection of fundamental human rights, at least in the exclusive cases of the Romanian-speaking Romanian citizens.

Agent or messenger?
Mno.hu asked several people, including colleagues, about the Dan Tanasa phenomenon in Transylvania. Most people only talk anonymously, because they are afraid that the notorious blogger would harass them and immediately cite them to the court. Almost everyone thinks that he has relations with the secret services. He spent years in Spain and now he lives in Germany, so he is likely to work for the Romanian foreign intelligence. Otherwise, he could not have been informed about the fact that the mayor of a small Székely Land settlement put up the Székely flag. The blogger reported that with photos within days.

László Szőke, Transylvanian journalist, wrote on szekelyhon.ro that Tanasa gets a lot of awards. Voiculescu Family Foundation awarded him a 3 and a half million HUF (11,290 EUR) for his courage with which he protects the Romanians of Hargita-Kovászna counties. Voiculescu himself was sentenced to 10 years by the national anticorruption prosecutor’s office (DNA). Mno.hu knows that the blogger already received a scholarship from the foundation during his university studies. He is also a frequent guest at Antena 3 TV that is owned by Voiculescu. Mno.hu asked Dan Tanasa about his reports, complaints and observations, but he has not responded so far.

Relationship network, or the network is alive and well
If you search through the Facebook profiles of some people it becomes revealed that Dan Tanasa is in a daily contact with former and current Romanian Prefects of Hungarian-populated counties, with Székelyföld Romanian Orthodox bishop Ioan Selejan and with various organizations of Székelyföld Romanians. While he wins several lawsuits sometimes he also takes a knock. In 2014, he complained about the Nyírő József commemorative ceremony, because he believes that the organization popularized Fascist, anti-Romanian and anti-Semitic views. The Gyegyószentmiklós prosecution rejected it.

State employee Mircea Diacon – who was sent to Háromszék – is the enthusiastic supporter of the blogger. He is the head of the Kovászna County Consumer Protection Office and he strikes down on every perceived or real illegitimacy, mno.hu said. Székely flavor Diacon has led the office since 2013. When he punished the Háromszék butchery for the use of the phrase “Székely flavor” he explained it by how there is no such thing as a “Székely flavor”. However, he did not respond to the question asked about the phrase “traditional Romanian flavors” which can be found in several Romanian stores. According to mno.hu, his zeal becomes tragicomic at times: since he insists on the Romanian labeling for every product, he made the name Rigó Jancsi sweets of Rigó Jancsi pastry shop change into “Mierla Ionica” with the Hungarian name below.